What is the Impact of Sleep Apnea on Canadians?

Sleep apnea is a sleep related breathing disorder. The word apnea means 'no breathing', and sleep apnea refers to pauses in breathing that occur during sleep. On average, these pauses last for 10 to 30 seconds, until the brain reacts to overcome the problem. With each episode of apnea, blood oxygen levels are reduced (hypoxia), and sleep is disturbed as the sleeper must wake briefly to resume breathing. However, the sleeper typically does not become fully awake, and usually has no recollection of the awakening. This cycle happens repeatedly throughout the night, interfering with the normal sleep pattern that one needs to feel rested and refreshed in the morning. 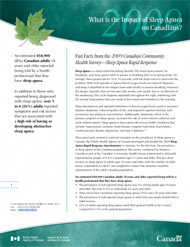 In addition to the people who reported being diagnosed with sleep apnea, over one in four adults reported symptoms and risk factors that are associated with a high risk of having or developing obstructive sleep apneaFootnotea, the most common form of sleep apnea.

Individuals with sleep apnea had other chronic conditions.

Many Canadians were diagnosed with sleep apnea without the benefit of sleep laboratory testing.

While many individuals with sleep apnea were receiving treatment, most were still overweight or obese, a key factor in obstructive sleep apnea.